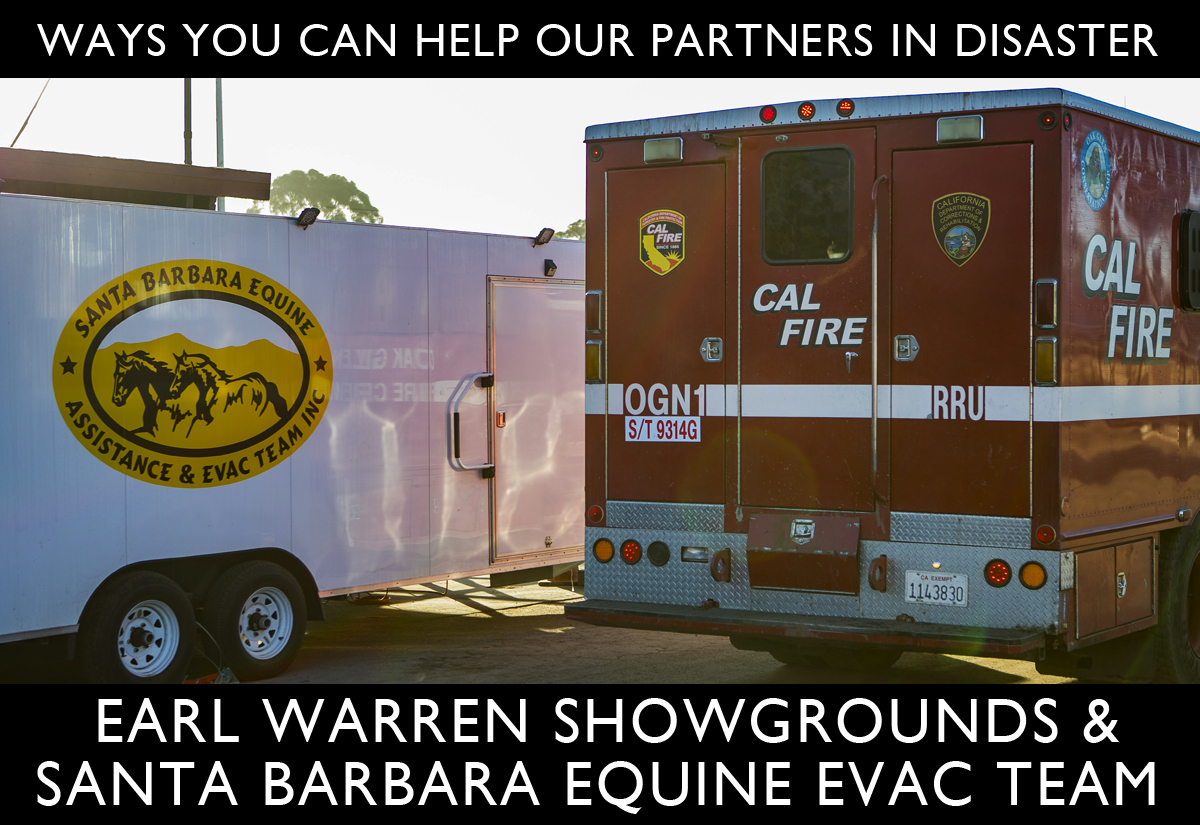 and the Santa Barbara Equine Evacuation and Assistance Team

help our community in times of disaster.

Earl Warren Showgrounds functions as the primary facility for large animals and staging ground for Incident Command in South County. It also houses the Santa Barbara Equine Evacuation & Assistance team and provides access to its stable facilities for the evacuation of large animals.

A Need for Charitable Financial Donations:

Santa Barbara Equine Evacuation and Assistance Team: Funds and supplies donated to SB Equine Evac are tax-deductible and go toward the procurement of feed for animals sheltered during a disaster, as well as bedding, supplies, and safety equipment necessary to carry out our mission.

Background: Earl Warren Showgrounds functions as the location that houses Incident Command during South County disasters.  It also houses Equine Evac and provides access to its stable facilities for the evacuation of large animals. The Showgrounds has an operating budget of approximately $2.3M and was in relatively stable economic condition until about five years ago when the Brown Administration cut all funding from the state to zero. The budget cut amounted to about $200k per year and also transferred costs the state had been paying for insurance and other items to Earl Warren.  To address the budget cut, the Showgrounds depleted reserves and the facility itself has a significant backlog of deferred maintenance.  Given that the Showgrounds is classified as a Class 4 (small) facility, it is harder to stage the kind of for-profit events that support larger fairground facilities.

The following are the natural disaster incidents that the Earl Warren Showgrounds has assisted within the last ten years:

It should be noted that the last four events occurred since the Sherpa Fire in 2016.

Payment for Services: The Showgrounds is not paid to house animals during a natural disaster.  In order to accept animals that are evacuated, it partners with Equine Evac who assumes all responsibility for evacuation, intake, and cataloging, feeding and care.  Further, the Showgrounds cannot bill for hosting Incident Command unless there is formal disaster declaration at which point they can request funds from FEMA.

Needs and Donations: To help address the state budget cuts, the Showgrounds created a non-profit arm that can accept online donations via PayPal – the Santa Barbara Showgrounds Foundation: http://sbshowgrounds.org/.  There is a significant need for additional funds both in the short term to address disasters such as the Thomas Fire and the Montecito Mudslide and in the longer term to preserve and improve this critical infrastructure asset in SB County.

Status:  This all-volunteer organization is currently housing the largest population of large animals displaced by the disaster(s) at Earl Warren Showgrounds.  They have been on-site since the start of the Thomas Fire in early December when large numbers of horses were transported to the facility under emergency conditions.  Currently, they are housing 193 animals including horses/pony/donkey, ducks, geese, turkeys, llamas, alpacas, cows, steers and rabbits. They are the ones who go into the disaster zone to rescue the large animals under extremely difficult conditions. They have a small housing trailer on-site at Earl Warren that is their base of operations, horse and livestock trailers to pick up large and small animals, and at least one volunteer who sleeps on site every night.  They do all the feeding, mucking, and exercise of the animals.  They also assist in making arrangements for owners whose large animals remain in the evacuation area to get them feed.

Current Needs:  The greatest need is for charitable financial donations to cover the cost of feed, shavings, equipment upkeep, etc.  We are working to get them set up with a direct donation service such as PayPal and hope to have that resolved today.  Longer term, they need an additional housing trailer as well as a golf cart to get around the fairgrounds.  Suzanne immediately covered their existing feed bill at La Cumbre Feed for which they were enormously grateful as they rely on donations to cover all their costs.