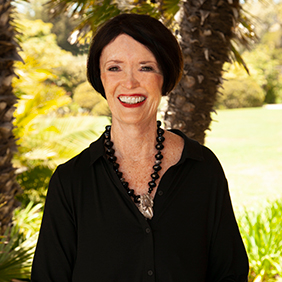 Suzanne Perkins is Santa Barbara’s preeminent real estate professional. She has consistently garnered Top Agent awards and her stature and reputation in the industry are without parallel.Suzanne has earned the respect and admiration of her distinguished local, national and international clientele and she has consistently outperformed other agents in Montecito, Santa Barbara and Santa Ynez.

Suzanne Perkins is incredibly honored to receive the ‘Realtor Award of Excellence‘ as presented by the Santa Barbara Association of Realtors at the Annual Awards Luncheon held at the Bacara Resort on Dec. 3.

The award was created to recognize a fellow Realtor who not only excelled in the standards of their practices and transactions, who also reached consistent dollar volume, and who also consistently demonstrated a lifetime vocation of being of service to the community and fellow real estate agents.

The Perkins Group is honored to be included on the 2021 WSJ REAL Trends + Tom Ferry “America’s Best” list for Small Team by Volume!

Thank you to all of our amazing clients for helping us rank #44 in California!

#8 Individual Agent in Santa Barbara Amongst All Brokerage Firms

#4 Individual Agent in Santa Barbara Amongst All Brokerage Firms

Committed to extraordinary results for her clients, Suzanne brokered 4 of the 5 most expensive transactions in Santa Barbara last year.

#1 Individual Agent in Santa Barbara Amongst All Brokerage Firms

In 2007, Suzanne Perkins earned the accolade of #1 Agent worldwide for Sotheby’s International Realty and more importantly the #1 Agent in the country out of 1.2 million REALTORS. In 2012 Suzanne was once again named #1 Agent in Sotheby’s Offices in Montecito, Santa Barbara and Santa Ynez. She was also the #3 Agent in Sotheby’s California Offices and was ranked #7 Agent in all of Sotheby’s Offices in the United States. The Wall Street Journal has recognized Suzanne on numerous occasions, and has consistently included her in the list of the Top 50 Real Estate Agents in the United States (see details below).

Her most important sale occurred in January 2007, when she represented the sellers of El Cojo and Jalama Ranches in the largest non-commercial transaction in California history. The combined listing value of the two properties was an astounding $155 million. In February 2007, she also represented both the Seller and the Buyer of the most expensive residential beachfront property in Santa Barbara to that date.

Learn more about Suzanne and her Pan Am Days.